Shishito peppers! I love shishito peppers! I used to eat these in the summers when I lived in Japan. Back then, I only ever saw them served in beer gardens as a drinking snack. And they do go great with beer! I only just started seeing Shishitos in the U.S. in the last couple years, and now they are all over the menus of the hippest restaurants. Alas, most restaurants slaughter them, which is too bad, because they are super easy to make well. Just last week I had a lame Shishito appetizer at a fancy Asian fusion restaurant in Pittsburgh – the menu called them “smoked on a hot stone,” which sounded intriguing. I love peppers, but these were served without any sauce and covered with bonito flakes (dry fish flakes) and they just tasted dry and salty. Extremely blah. A month ago I had another shishito appetizer here in Austin. I think the chef thought people would go for a dish that used all the currently hip spicy foods – they combined shishitos with sriracha sauce, chipotle and goat cheese. If only making tasty food was as easy as throwing together all the trendy foods of the day. In this case – it did not work.

But FEAR NOT! Traditional shishitos are the easiest frickin’ thing in the world to make. Just get your shishitos, a little shoyu, sea salt and maple syrup and you can make shishitos to rival any of those most excellent Japanese beer gardens. If you want to be even more traditional, add a few bonito flakes on top when you are done. Simple yumminess. So watch on, dear reader… then grab a frying pan, a beer and surrender to tasty happiness 😀

More fun, tasty and interesting posts for your perusal...

Here is a list of our favorite food movies! Great for date night or having friends over.

END_OF_DOCUMENT_TOKEN_TO_BE_REPLACED

Hate it? Crave it? Avoid it? If you live in the US, at least one of those probably describes your relationship with bread. Maybe all of them! The explosion of people who are trying to limit their gluten intake has made everyone who thinks...

END_OF_DOCUMENT_TOKEN_TO_BE_REPLACED

are the two words that you want to come to mind when you're looking for a date night restaurant. Rachel and I try to have a date night a couple times a month, and we usually have an idea of where we want to go. This time, the... 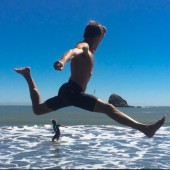 Leftovers and Tacos! (and a delicious Verde Sauce recipe)

Join our community so we can share stories with you and send news and tips!

You have Successfully Subscribed!